Distance from London to Seattle: 4,792 miles

Norwegian flies budget flights from London Gatwick but does not operate with a business class cabin. If you wish to fly business class, your two main options are British Airways and Virgin Atlantic.

British Airways operates up to 11 flights per week from London Heathrow to Seattle with daily departures. The flights have been times to make maximum use of the time difference – you leave and arrive mid afternoon. Return flights leave early evening allowing you plenty of time to make the most of your last day in Seattle.

Flights are operated by a Boeing 777 featuring BA’s Club World product. When departing Heathrow you’ll be able to enjoy the business class lounge and a complimentary treatment in the Elemis Travel Spa. British Airways is best known for its meal service. Salads full of fresh vegetables, succulent meats, and decadent desserts are par for the course in business class, and the airline has recently introduced new display trolleys, which are wheeled down the aisle by cabin crew.

Virgin Atlantic currently utilises an ultra-modern Boeing 787 Dreamliner on flights from Heathrow to Seattle, featuring dimmable windows and larger overhead storage bins. The Upper Class experience includes a complimentary chauffeur drive service to and from the airport, along with access to the Virgin Atlantic Upper Class Wing at Heathrow. After the personalised, dedicated check in, you’ll beat the queues and whizz through a Private Security Channel, before relaxing in the airline’s award winning Clubhouse. Onboard the aircraft, each Upper Class Suite features an ottoman, in seat power socket, live news feed and a 10.4″ TV. The seat converts into a fully flat bed and comes with a comfortable sleep suit so you can get some rest on your journey to or from Seattle.

Those that travel British Airways on a business or first class fare will have access to the Galleries Lounge at Seattle-Tacoma International Airport. Boasting a bar manned by a highly skilled bartender, luxurious shower facilities stocked with the best beauty products, and a buffet filled to the brim with the finest foods and snacks, this is a great place to relax and unwind before heading into the centre of one of America’s most eclectic cities. 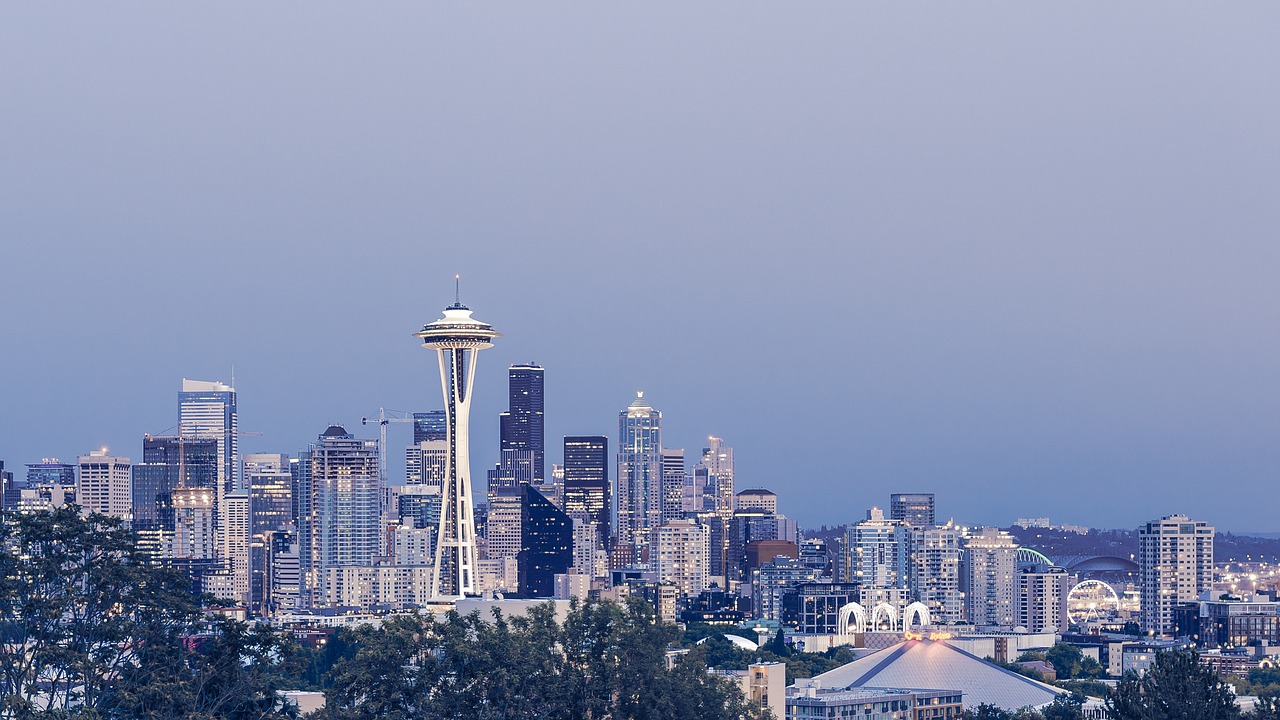 If you’re looking to go downtown from the airport, expect taxi fares to cost you between $40 to $50, before tip. If you don’t mind a little company, there are shuttle buses and vans that cost between $5 to $38, depending on your final destination.

Rideshare apps like Uber and Lyft are the most affordable and convenient way to get from the airport to downtown Seattle, particularly if you choose Uber Pool.

Once you’ve checked into your hotel, getting around the centre is easy, as there are two streetcar lines, one monorail line, a water taxi, as well as a light rail transit system that has two lines running between downtown, the airport, and the University of Washington.

Where to stay in Seattle

Seattle has plenty of great hotel options to suit any budget. If you’re looking for a mid-range option you will love the Silver Cloud Hotel. Situated in the popular Seattle neighborhood of Capitol Hill, the hotel puts you within easy reach of a number of amazing restaurants and hikes through some of the best parks in the city. As for the property itself, the on-site restaurant offers an amazing selection of micro-brews, and the rooms offer wet bars and bathrooms stocked with Aveda products.

If you are looking for a tranquil hideaway during your trip to Seattle, you may like what the Inn at the Market has to offer. Situated just a half block away from Pike Place Market,  you will be within a walk of one of Seattle’s most prominent attractions. Back at the hotel, you will love the rooftop deck, as it has inspired views of Puget Sound and the city centre.

Things to do in Seattle

Situated in the Pacific Northwest, Seattle is a city that has been blessed with natural and cultural assets which have attracted visitors for generations.

Start your walkabout Seattle with a visit to Pike Place Market. Home to a fish market where mongers throw around the morning’s catch around like toys, the very first Starbucks coffee outlet, and a wide array of arts and crafts created by local artisans, this place will easily consume an entire morning, so plot out the rest of your day appropriately. After that we’d recommend heading to Copperworks distillery, where you can taste spirits made from malted barley and distilled in traditional copper stills.

From there we’d recommend heading over to the Space Needle, which was built for the 1962 World’s Fair and is now the most iconic landmark in Seattle. Head up to the observation deck, where you can enjoy views over Seattle and right across the ocean. Afterwards pop next door to Chihuly Garden and Glass to see the incredible glass sculptures by famous glass blowing artist Dale Chihuly. If all that sightseeing has left you feeling thirsty, end your day with cocktails at the rooftop bar of The Thomson hotel, which is the city’s best sunset venue.

If you have more time in Seattle you may also want to head over to Georgetown, which is home to many great breweries where you can enjoy free tasting flights and sample craft beers. Nearby is the Museum of Flight, which is a must-see for aviation enthusiasts. Here you’ll be able to see planes from throughout history, including Concorde and Air Force One.

If you wish to book business class flights to Seattle, SkyClub can help get you the very best fare. Simply give one of our super friendly experts a call on 0207 255 1234 and we’ll be happy to help.